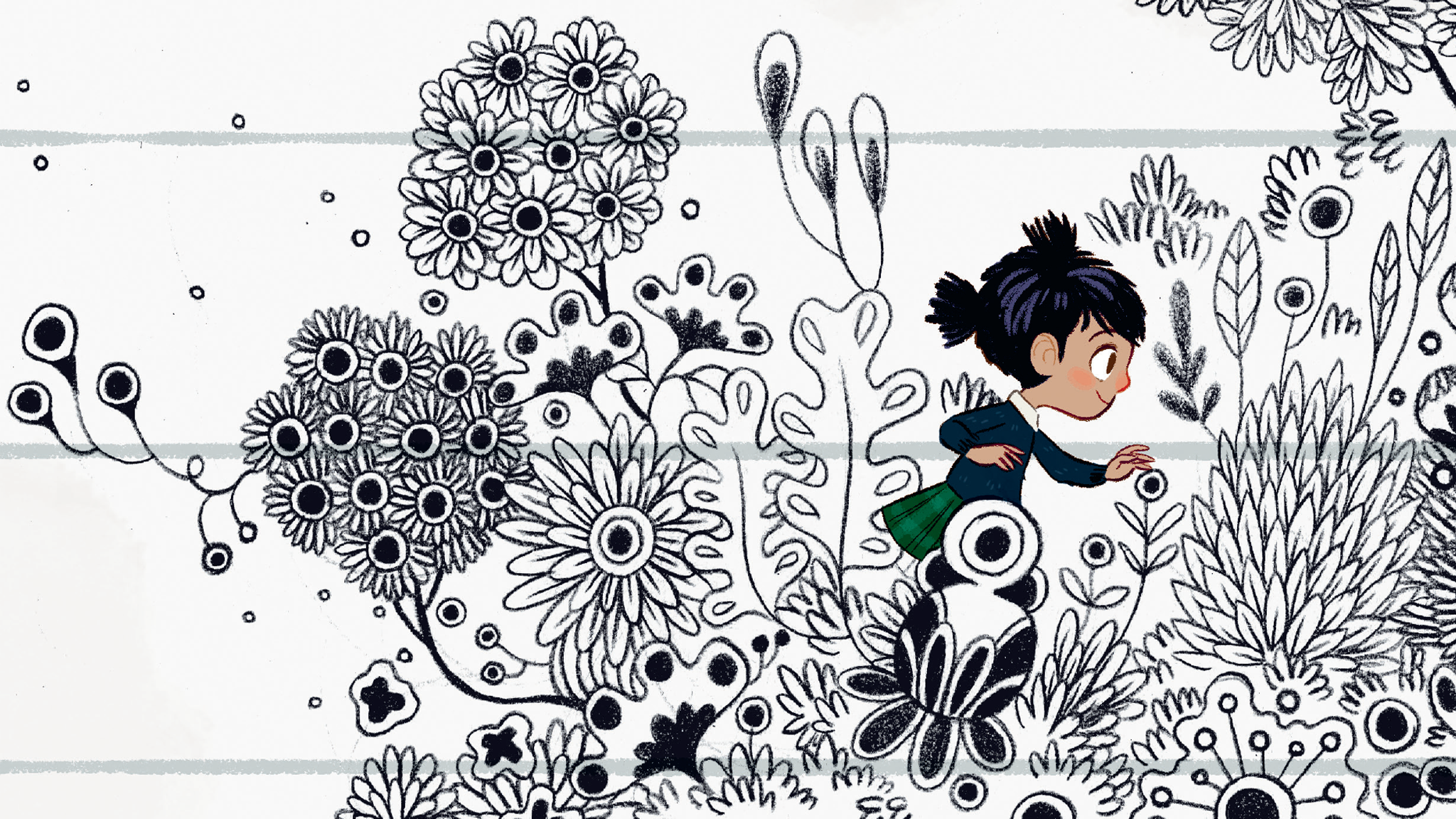 Lorena Alvarez is currently in the gallery for her Nightlights book signing, so we thought it fitting to repost her interview with Matthew Tobin as featured on nobrow.net!

When I saw the cover of Nightlights for the first time in the Nobrow catalogue, I knew that I had been hooked. There was something about the style and colour of that cover that brought images of Miyazaki’s worlds to mind as well as a touch of Sendak’s Outside Over There and Henson’s Labyrinth: a taste of the mythical and magical daubed with a sense of weighted reality. When I managed to get hold of a copy and found that it was all of these and yet, equally, none of them – a story set within the imagination of a vibrantly creative individual – I was swept in from the first few frames and taken on a wonderful journey which I still regularly return to. My review can be found here.

Thanks to the people at Nobrow and Lorena herself, I was able to ask the creator a few questions that I had about Nightlights and the creative process that went into its making:

1. Can you tell me a little about yourself and the path you took that brought you into illustration and creating Nightlights?

I’ve always been interested in writing and drawing my own stories but the idea of becoming an author was too intimidating. I was waiting for a big, epic story to come out of nowhere in my head and it took me a while to understand that it doesn’t work that way. I started then with “small” ideas, taking notes from my everyday life, writing about the music I like, about the people I met; it wasn’t only a good exercise but also it gave me an opportunity to communicate with others and share experiences. 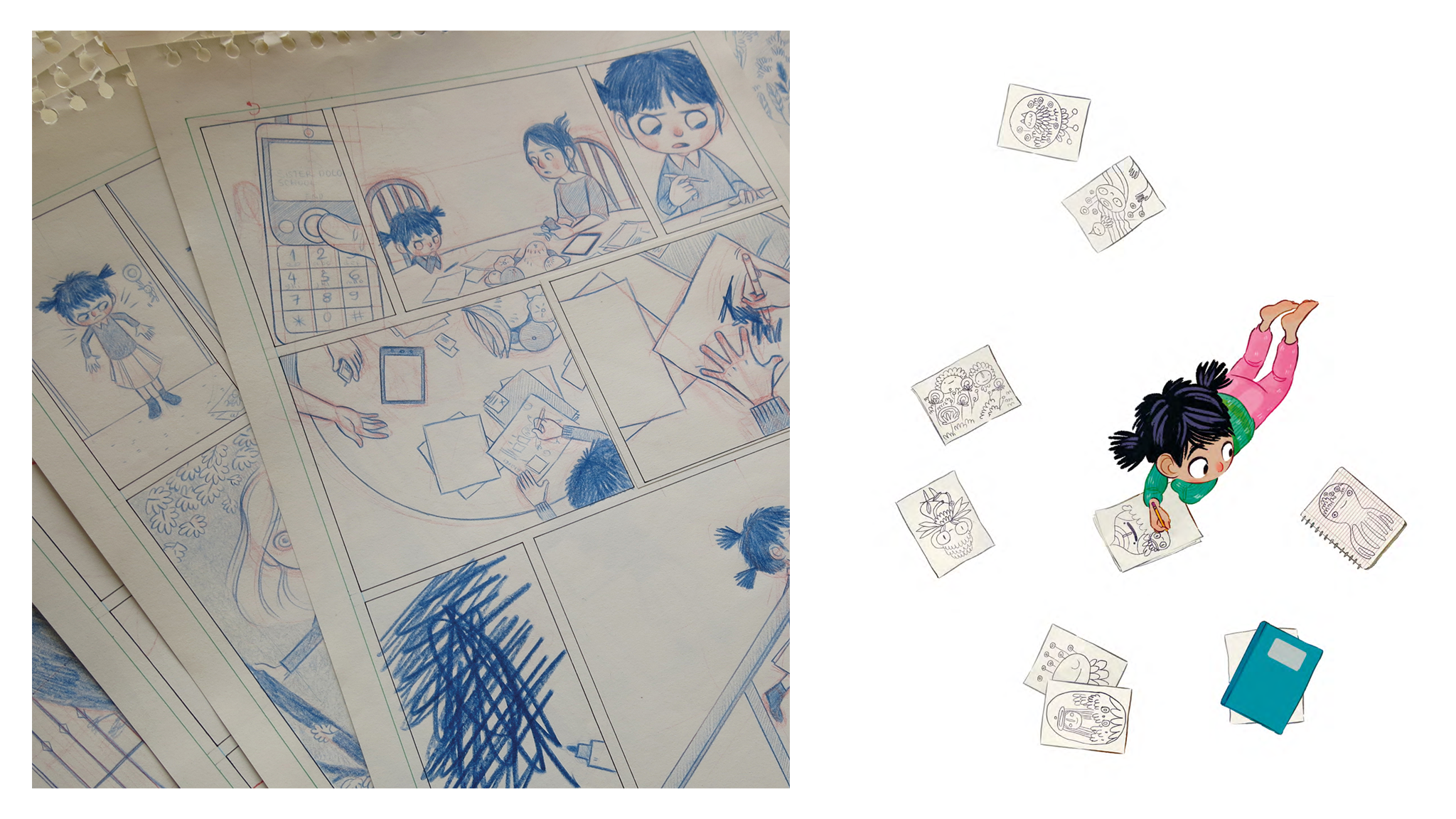 When I wrote the first draft for Nightlights I was living in a small town in Arkansas. Being in a place so different from Bogotá gave me enough distance to see things in perspective, to appreciate my personal story in a different light. I was educated in a catholic school for girls and it was something I dreaded to talk about, but at some point I realized that the whole experience was an important part of my identity. I thought a lot about the stories we used to tell each other—particularly during our elementary years—and they were amazing. Unknowingly, we mixed the doctrine we learned from the nuns with elements of our own imagination, pop culture and the social context we lived in. With all that in mind I started to work in the plot of Nightlights. 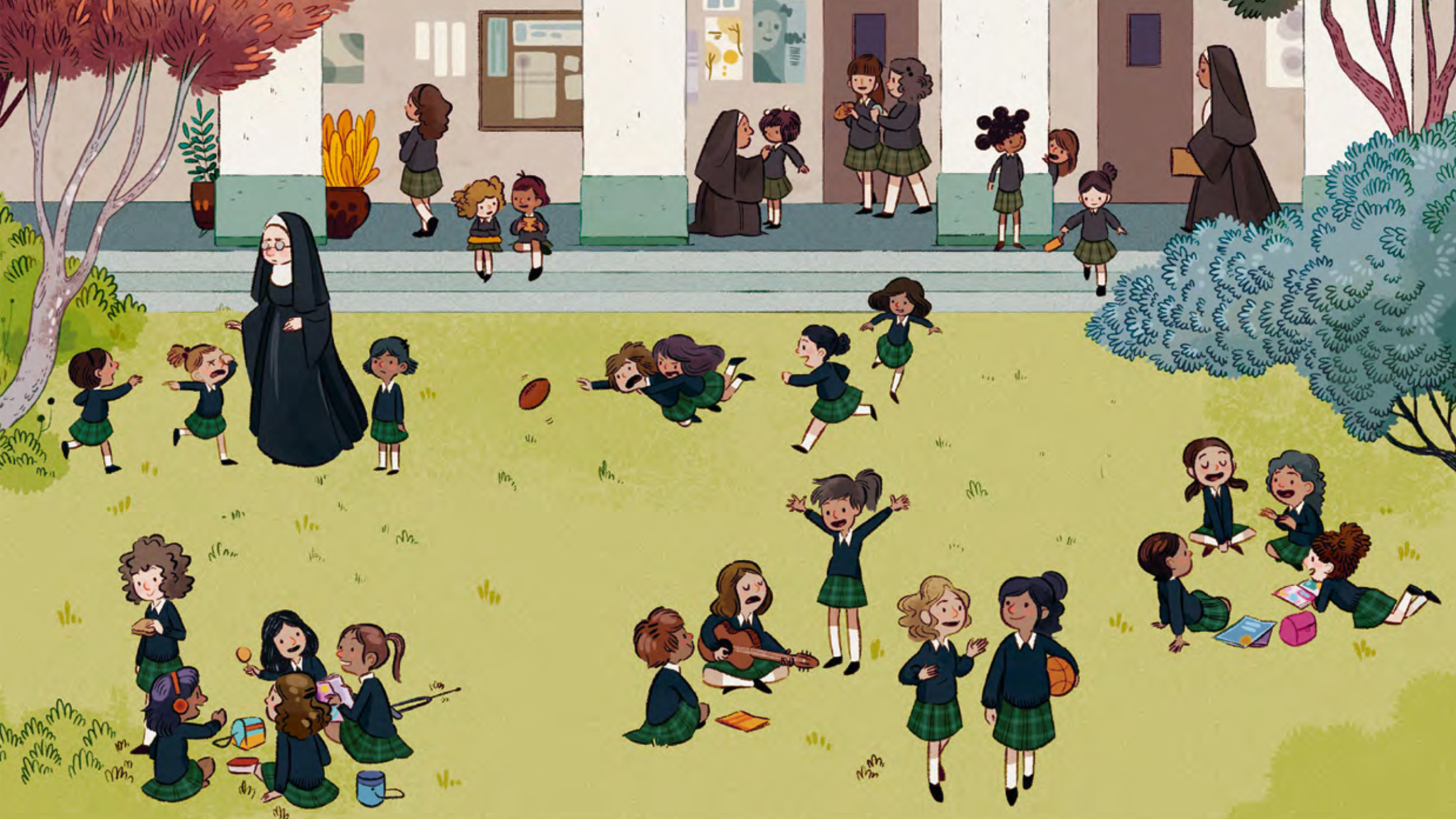 2. One of the things that immediately grabbed my attention when reading Nightlights was where you positioned me as a reader. Sometimes I was high up, looking down and other times I was at ground level. Using some of the pictures from your book as examples, could you tell me a little about how you go about choosing the reader’s positioning and what your intention is in some scenes? 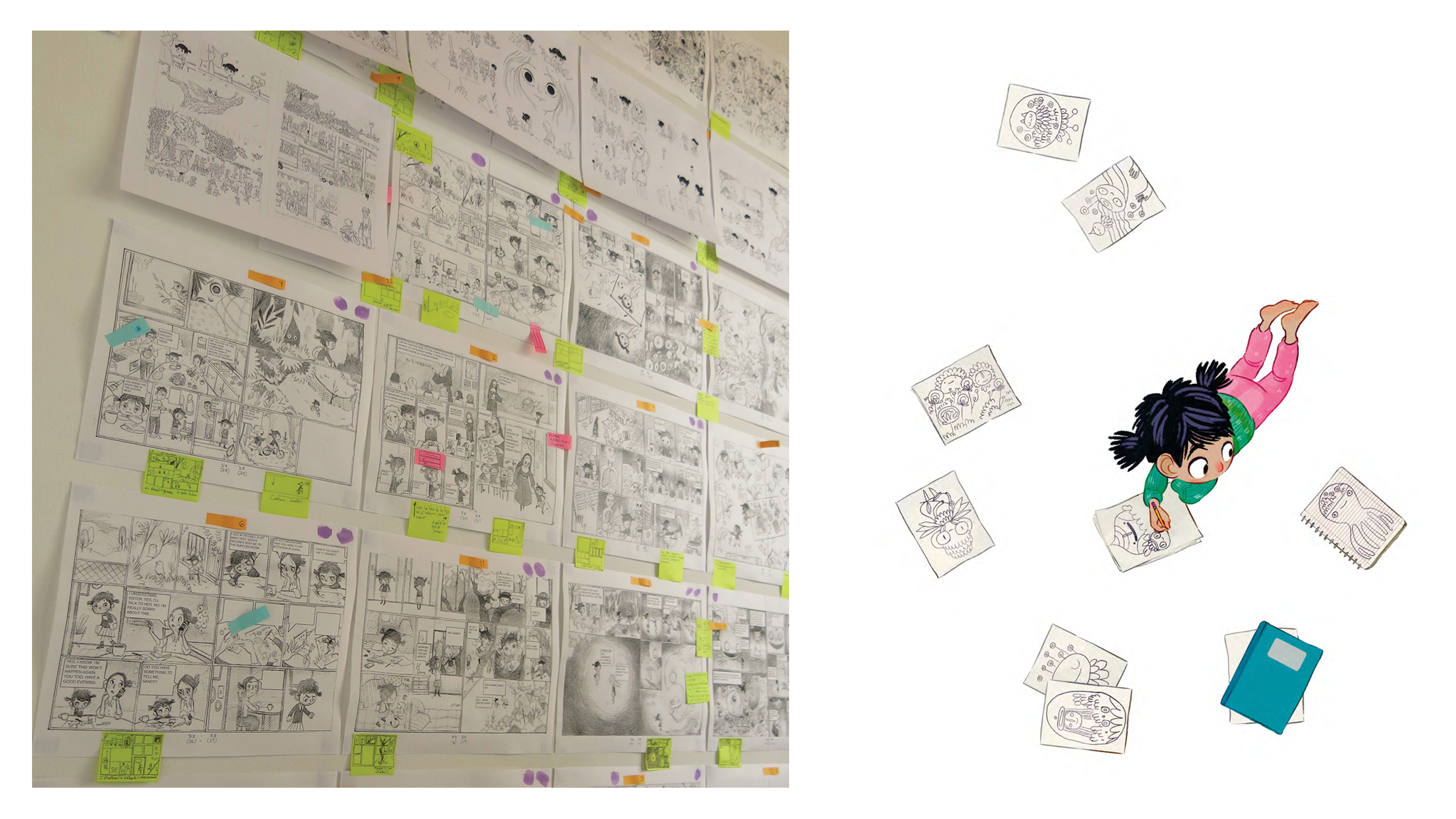 I think it depends on what aspect of the characters I want to present to the reader and the action that’s taking place. I draw many scenes viewed from above because I like to give and idea of how Sandy interacts with the place she’s in. For example, when Morphie and Sandy are playing in the supply room, I wanted to create a dynamic image, without a rigid sequence to follow, in which both girls are using didactic objects as toys, moving freely in an otherwise regulated space. Also, when Morphie leads Sandy to the forest I wanted to show how Sandy is engulfed by the surroundings which symbolizes Morphie’s power. When I want to show more subtle aspects of the story I like to draw details, like Sandy’s hands which represents her feelings and reactions. 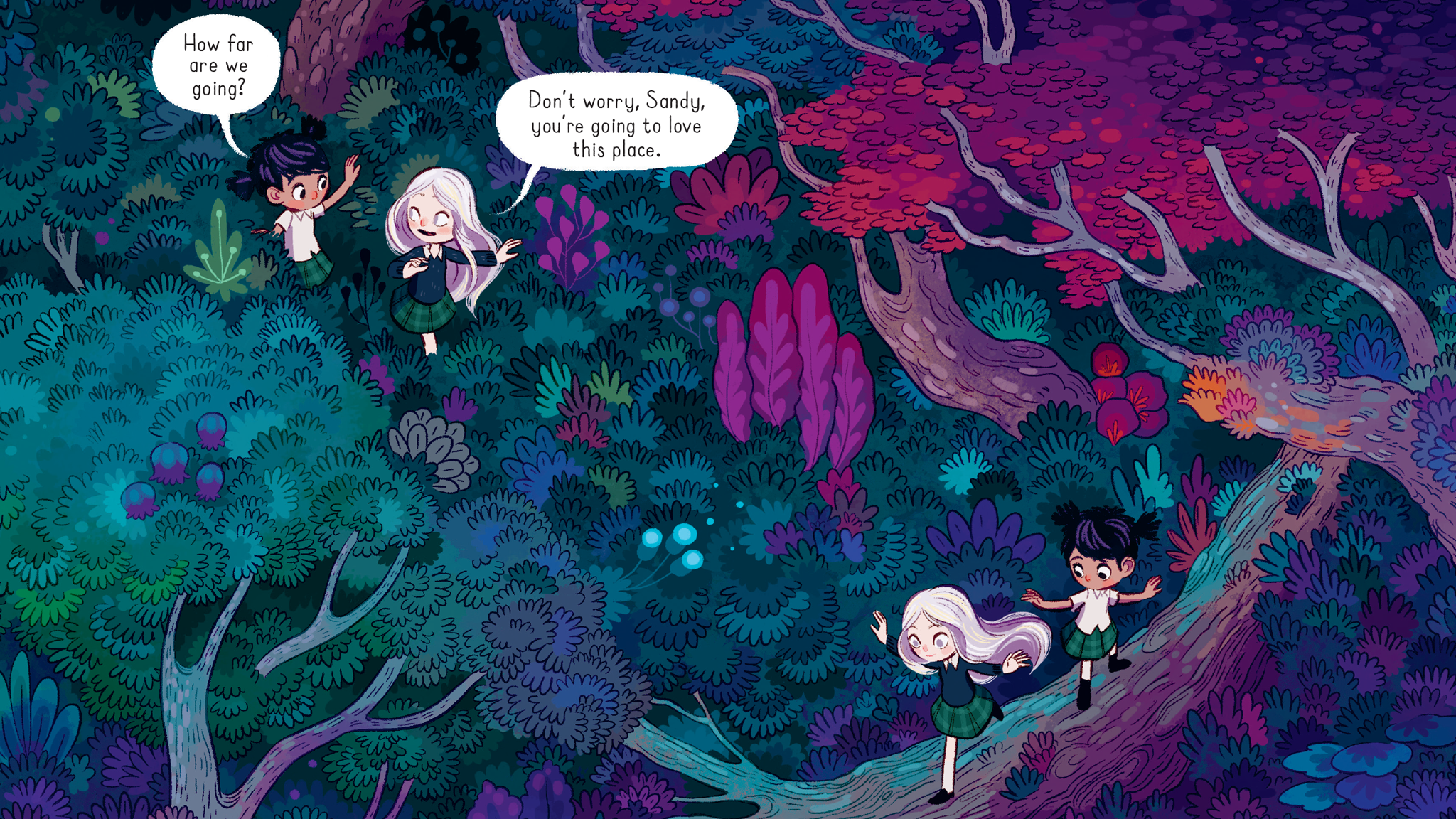 3. Sandy’s story really struck a chord with me with and how much we encourage children to follow their dreams and interests. How much of your own story is she telling?

Sandy was created as a silent character in a short story I wrote before Nightlights. She actually resembles me during that age, with the ponytails and the oversized skirt. I also used to imagine that there were little bright dots in the darkness of my room at night, that I could catch them and give them any shape I wanted. For a long time I didn’t have close friends at school and I was found being by myself during recess.

In a way, Sandy has allowed me to acknowledge and appreciate the little girl I once was, with her flaws and complexities. It wasn’t until I started this project that I could see how the decisions I made being so little draw the path I would follow ever since. I have drawn since I can remember; I made the decision of being an artist when I was a kid. I like to think that determination is still in me, so as it is in Sandy. 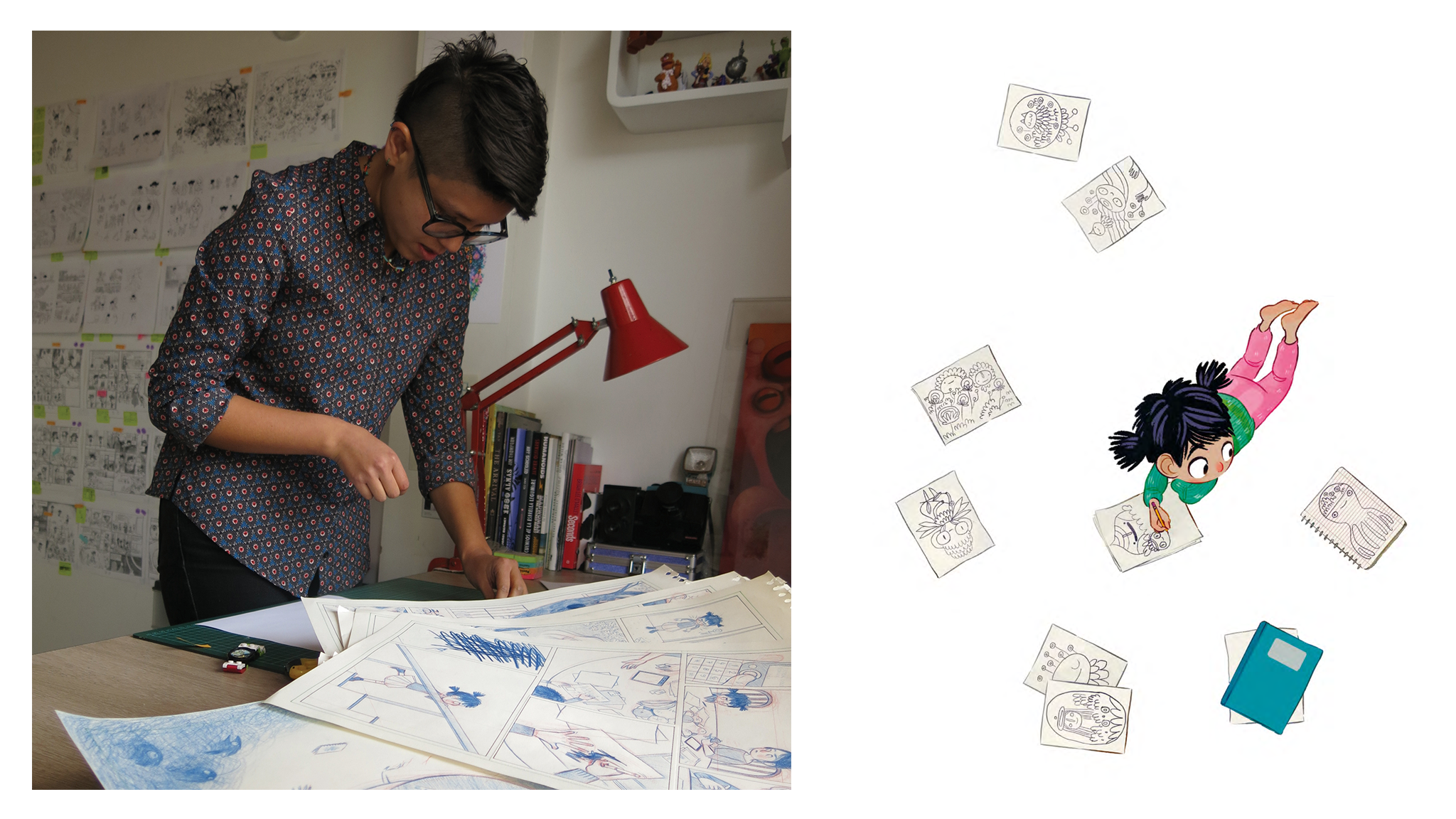 4. ‘Breathtaking’ is probably a good word to describe some of your panels. How you go from the start of creating a page to the end, sharing a little about your method and materials?

Thank you! I start doodling and writing notes, trying to “catch” and give shape to the idea I have in mind. Then I take all that mess and put it in a layout, working the flow of the story until I’m happy with the plot. Finally I start to clean the images and work in the dialogues.

5. There are too many scenes for me choose from which I enjoy. Which picture is your favourite and how long did it take to put together?

One of my favorite scenes is the one in the supply room, when Sandy and Morphie play together. It was very important for me to write it because I could define their relationship through that scene. 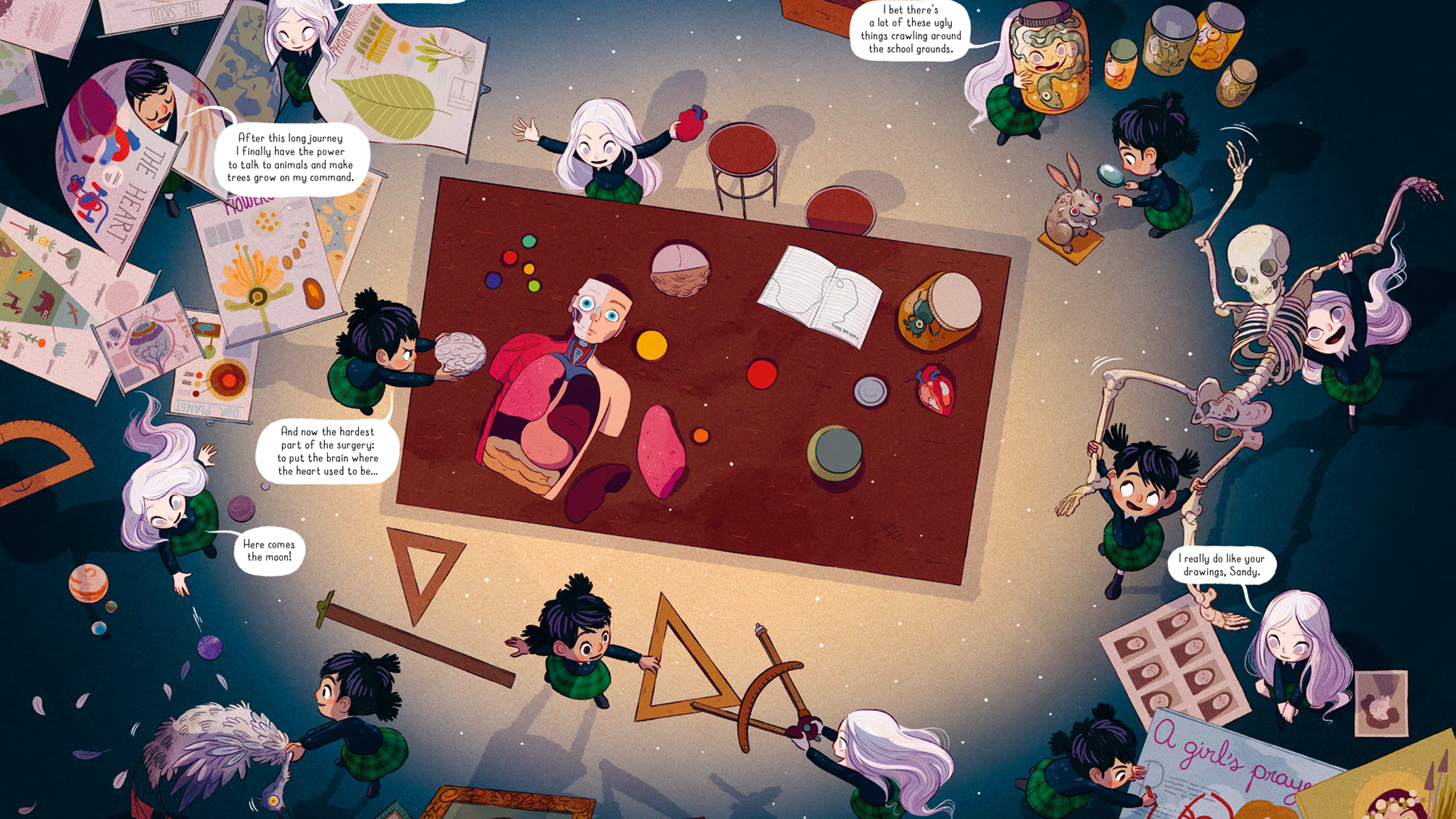 6. Can you give us a little sneak peak of your work-space and how a typical working day looks for you? (I know you’re extremely versatile and work in other mediums besides illustration – please do share)

This year has been kind of weird because I had so much to do, but I usually try to keep a routine. A typical day for me means to get up at 8am, feed my cats, water the plants, and check the online papers and the mail before getting to work. I like to take time and draw my sketches on paper before taking them to coloring in Photoshop. I dedicate two days a week to write. When it comes to exhibitions I like to paint with watercolors and acrylics, lately I’ve been also working with Ink and bleach. I make time to knit and sew, I haven’t been able to do it lately but i love to do plush toys. Now that I have a little more time I’m planning also to retake my guitar lessons and my swimming practice. 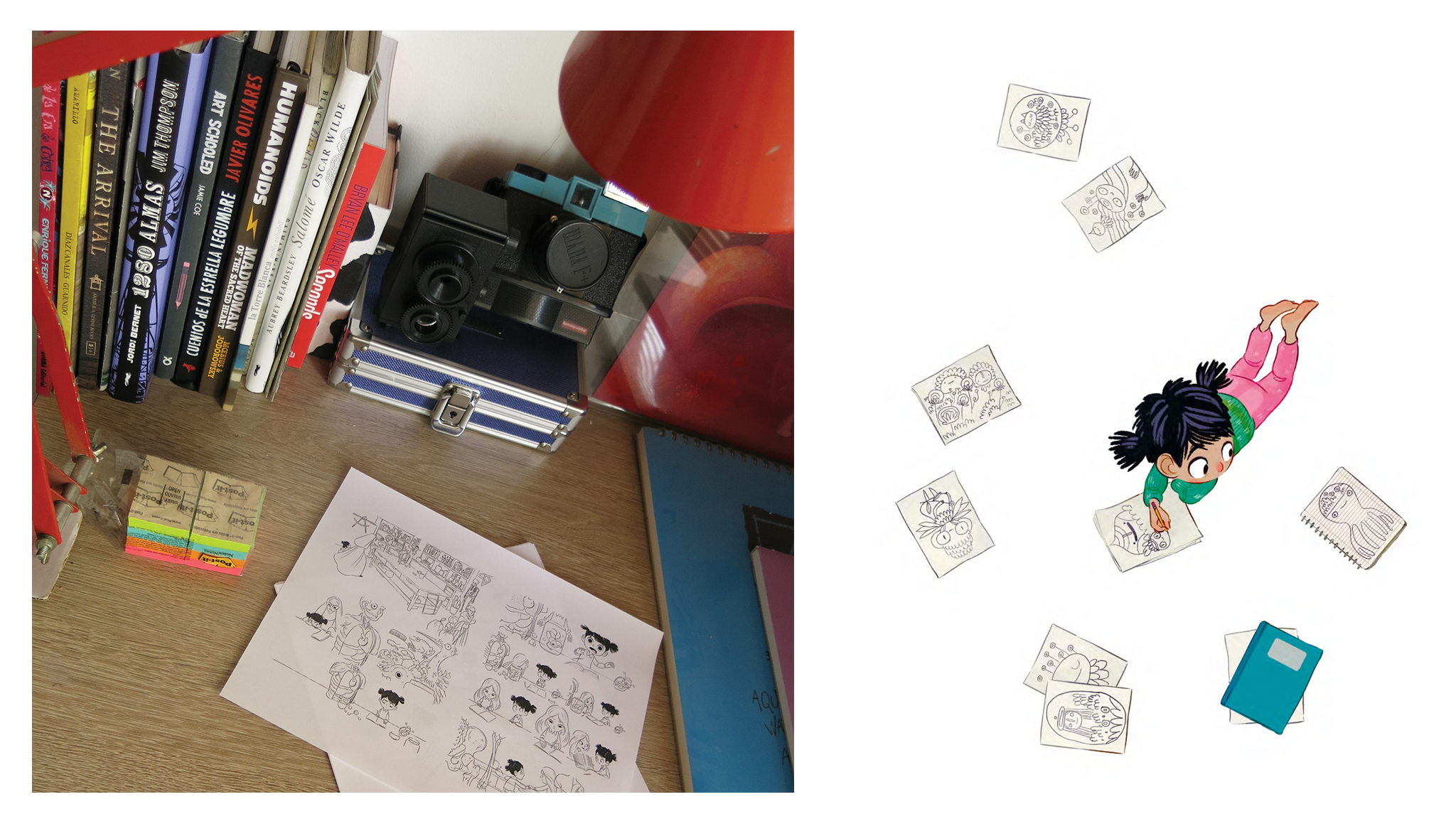 7. All readers will carry on interpretation of what or who Morphie is, but can I ask what Morphie means to you?

Morphie is a part of Sandy, that’s why she mirrors her in some panels and that’s why she won’t die or disappear. In a certain way Morphie represents the traps and insecurities you have to deal with when something you love to do becomes your job. I think it is a concern for many artists to lose their authenticity while dealing with the pressure of staying relevant and produce great things all the time to the pleasure and benefit of others.

Morphie is also that part of me that tells me to stop trying, that inner critic that we all have but sometimes grows so much that it consumes all your energy and makes you feel worthless. 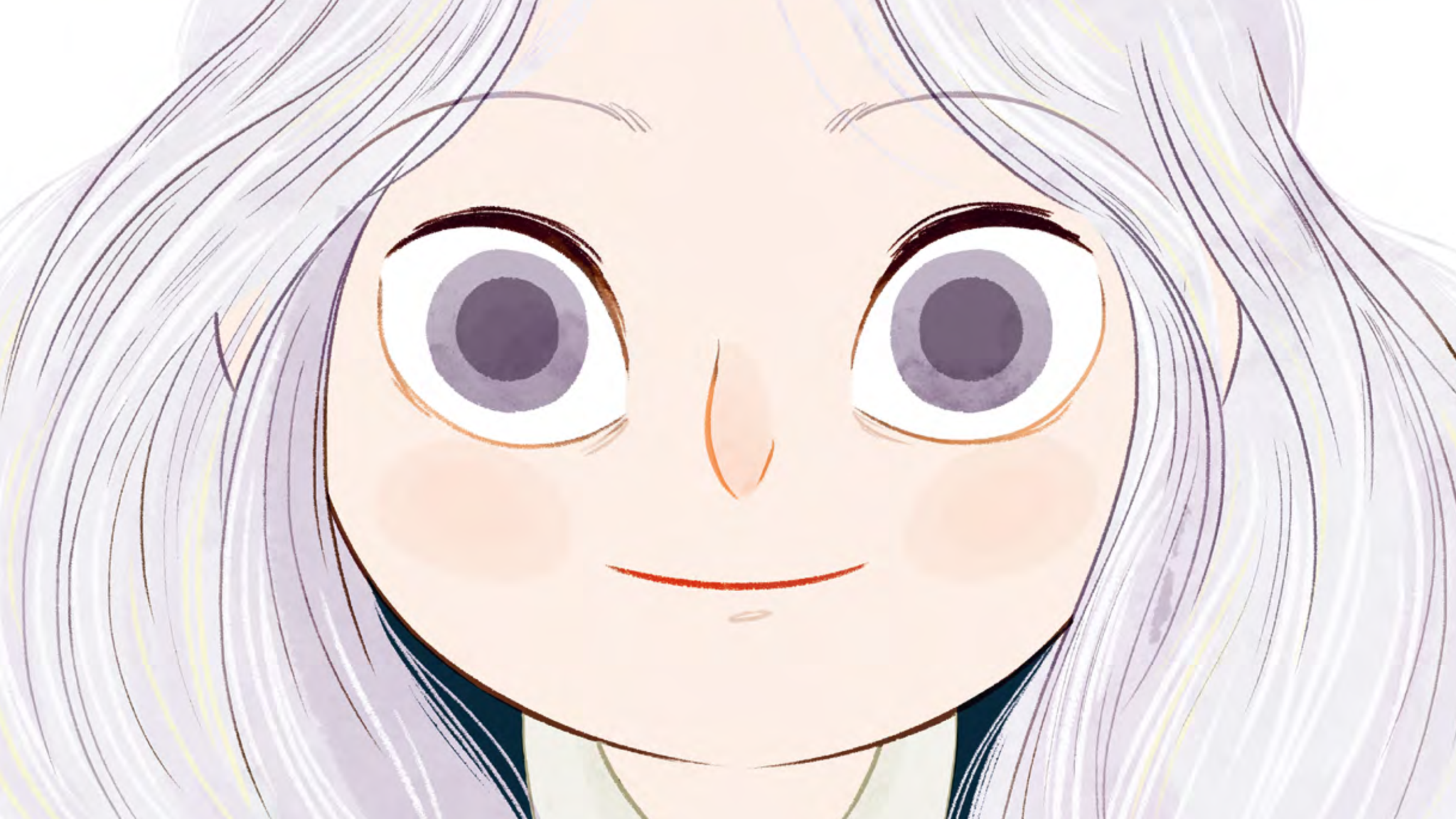 8. Finally, can you tell us of any future projects?

I hope so! :) I’m writing a second book, so I’m again feeling this mix of happiness and fear again, I’m really excited about it. I’m also planning to paint more, to create a new line of plush toys, to work in some animation projects too.

Special thanks to Nobrow Press for letting us repost the interview, and to Matthew Tobin and Lorena Alvarez for the insightful questions and inspiring answers—respectively (this interview originally appeared here)!

If you aren't here in-person getting your book signed by Lorena, visit our store and pick up a copy or snag one online. 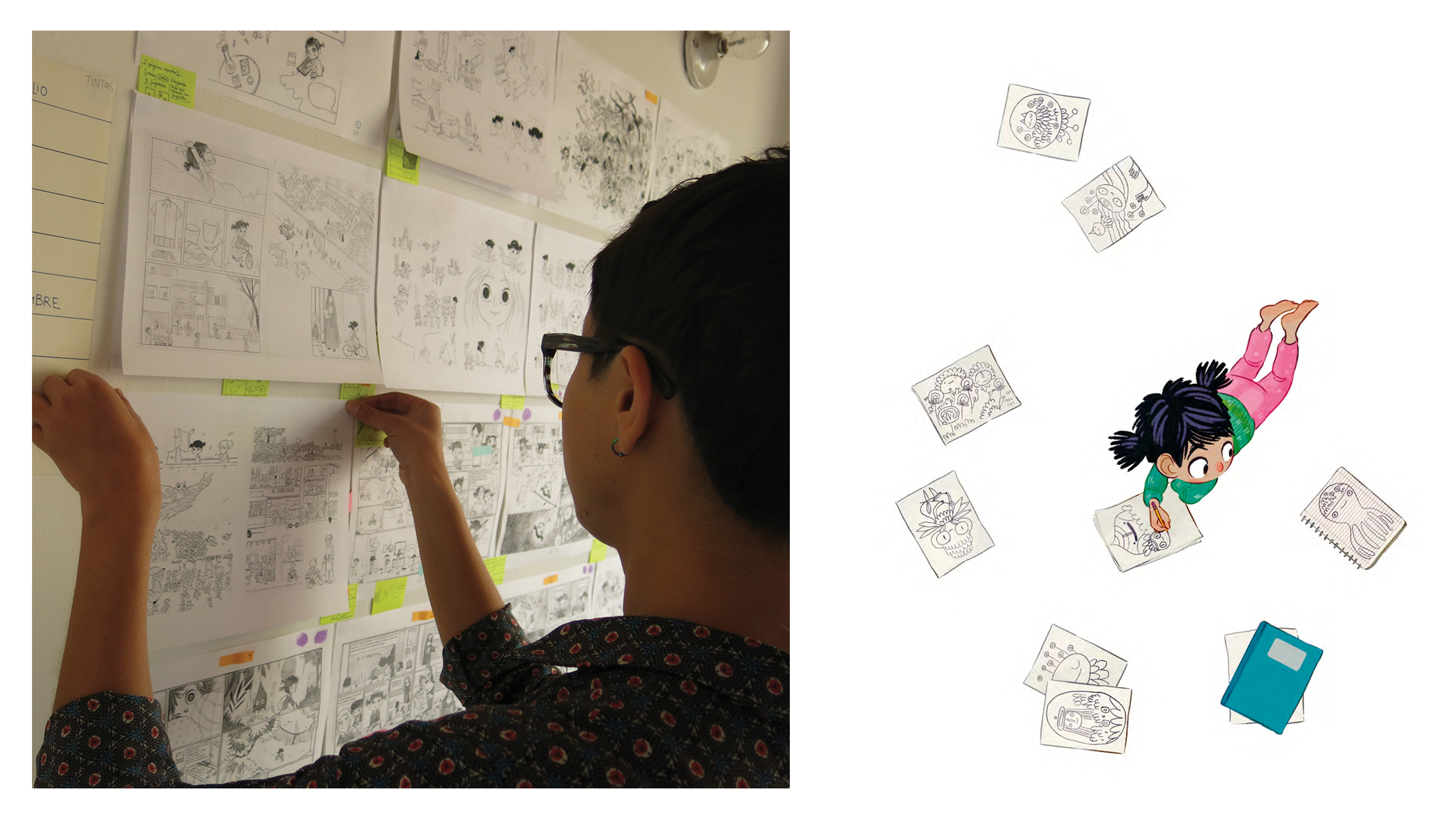