For anticipation of SWEET STREETS, meet just a sampling of some of the lovely Lolitas who will be gracing us with their presence. It's really a sight to witness the creativity and flair that goes into each outfit. I wonder what outfits they put together for us?

Everyone though is encouraged to dress the part this Saturday and show us what you got. Plus, you'll instantly receive 15% off any store purchase if you do. Work it!


Here's an amazing level of interactivity with a laser... I can only imagine what would happen if a cat could play with this.

Aw man, nostalgia's kicking in. Not just for Beast King GoLion "Voltron", but for the love of Legos! Every kid has a particular way of building their creations. (I spread out the pieces on my floor and seperating them in specific piles; sometimes by color, sometimes grouping them by size). Of course once you finished, you had to take it apart and build the "special" variants that they didn't give instructions for. Eventually the creation would fall apart and disintegrate into the giant rubbermaid bin of random Lego parts (I called mine the junkyard), which gave you free reign to combine your pirate ships with your medival space police.

There have been other Mobile Suit Lego's floating around the internet, but something about the actual transformation of the seperate Lions into the massive Robot is just so appropriate for the material. According to the creator, it took over 71 hours to build, with the use of a customizable frame meant specifically for Lego Mobile Suits (http://teknomeka.com). He even used Illustrator to create the pilot's suits!


Since 1979, this artist duo have been creating video, installation work that has made a dramatic impact on temporal projects in gallery and studio space.  From Switzerland, their work has been showcased internationally and seen by almost everyone in some way, shape or form.  They pioneered the dimension of art which explores the situation of chain reactions as well as the embodying physical representations of Chaos Theory.  As the camera pans from one station during the duration of the piece, each individual component feels as though it has it's own aesthetic exploration in material.  Their use of fire is very stunning. I have always admired the practical drafting skills of an engineer or a mathematician.  Whenever I look at books on physics or geology, I am fascinated with the complexity of the drawings often rendered.  When the worlds of art and science collide, the potential for spectacular things is sure to result.  Case in point, the work of Buckminster Fuller who throughout the 20th Century had an incredible influence on design, architecture and the movement of futurism, is worth revisited for artists and designers alike.  His designs border on aesthetic spontaneity, but revel in structural symmetry.  He is probably the most famous for his geodesic dome, which marked an incredible moment for civil engineering and architecture, the crossroads met through his conception of a far more dynamic space.

Oh and going back, his drawings are quite nice as well. :)

This Saturday AMMO Books and Gallery Nucleus invite you to join us for a reading, artist panel, and signing with THE RED SHOES illustrator Sun Young Yoo.
The Red Shoes is a modern retelling of a classic fable written by Hans Christian Andersen. Adapted by writer Gloria Fowler and illustrator Sun Young Yoo, this contemporary version offers readers a positive message that is sure to delight a new generation of readers and brings them into a magical world as shown through the artist's exquisite drawings.
The artist will be here for a reading of the book followed by a discussion and signing.
Those of all ages can come to enjoy the reading of the book. Those interested in the creative aspect behind the book will want to come for the discussion following, as the artist shares her insight and experience in the story telling and re-creating process.
Click here for more information on the event and the artist.
This book is also available for purchase here.
This Saturday, August 22
2:00PM - 4:00PM
Free Admission


I know we've been posting a lot of videos lately but this one is too good to pass up. I highly respect what this guy is doing. I thought painting on rice, or tibetan sand murals were ridiculous....

My favorite quote "Alice was gone....I think I inhaled her"

It reminds me also of nanoscientists who made the smiley face with actual atoms.


This is pretty funny:

Internationally renowned contemporary artist, Bill Viola has over the years continued the study of the medium of video art.  The central focus of most of Viola's work has been universal human experiences including birth, death and the development of consciousness.  Like many video artists during the 70s and 80s Viola's interest in Zen Buddhism has influenced the feats in which he attempts in many of his work.  I enjoy a lot of Viola's work and appreciate their pursuits.  For although he does not push his body to the degree of some of his peers like Vito Acconci or Chris Burden, his involvement is still very far reaching.  Many of his videos involve water, which gives a temporal aesthetic that is visually activating. I can only imagine what witnessing one of his performances must be like.
See more at http://www.billviola.com/

Parisian illustrator, Simon Goinard Phelipot's work is absolutely stunning.  His images are evocative, contemplative and of course, narrative , like most illustration work.  But where I find that Phelipot branches off is his ability to create very sensitive images.  In the midst of fine, expressive brushstrokes as well as a skillful color palette, lies also the determination to create an introspection of the human figure.  The people in his paintings are meant to be there, in that place and time.  The environment around them feels as though they have grown in accordance to their participation. This unique quality gives much more to the viewer than simple narration, it gives them a ephemeral situation.
See more of his work at http://www.resonance-art.com/

Note: The work you are about to see is not for those shy of blood, nor vegetarians who may squirm at the sight of meat. For artist, Victoria Reynolds it is this subject that she glorifies in her work.  The raw, slimy, textured appearance of meat, especially red meat takes the forefront as they are render with the precision of a still life of an old master. In addition, her baroque frames often mirror the same kinds of marbling of fat in the meat of the work.  From far distances some of these paintings, through our own preconceived awareness of still-lifes, appear as floral or fauna.  But once the viewer approaches the work closer, they quickly conceive the truth of the work.  What is also unexpected about Reynold's meat is that they are actually quite beautiful.  They are vanitas, permeating with the sensibilities of organic life and raw matter. 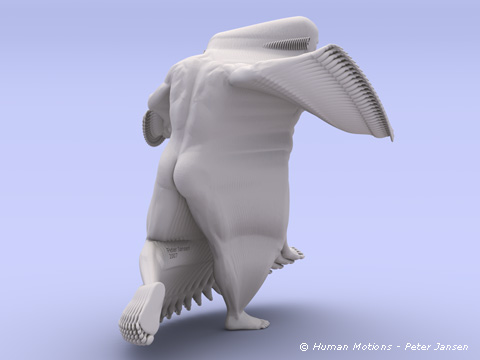 Peter Jansen has made into reality what comic artist Schuiten and writer Peeters fantasized about in the book Nogegon.

Try to guess what action this sculpture represents before clicking on the link below to see the rest of the artist's work.

This track is from the upcoming September release of Zero 7's high anticipated album, "Yeah Ghost".  This album appears to be a far more heavier, darker album, very different from the indie downtempo stuff from their previous albums.  "Simple Things", "When It Falls" and "The Garden" have all enjoyed much commercial success, but I feel that "Yeah Ghost" will be an album with far more liberties and risks to showcase the production skills of Henry Binns and Sam Hardaker.  Where previous albums established a kind of specific sound for Zero 7, "Yeah Ghost" is an attempt to reinvent themselves and leave behind characteristics that have inhibited the maturation of their music.


We have an amazing group of artists exhibiting with us this Saturday in TREE HOUSE with most regarded very highly in the illustration/animation industry. Please get acquainted with:

Tadahiro Uesugi
The Japanese artist is world-renowned as an illustrator and animator; often referred to as a "master" in the Illustration industry, his worked has been influential in many different genres of the art world, world wide. Some of his recent work includes the widely acclaimed animated stop-motion film Coraline!!! Uesugi is also involved with the fund-raising exhibitions/auctions for the Totoro Forest Foundation championed by Academy Award-winning filmmaker Hayao Miyazaki.

Tadahiro Uesugi | Tree House | Digital print, Edition 1/1 | 20" X 13"
Chris Appelhans
Who is currently working as an animator, illustrator, and designer. Appelhans work includes production and character design for animated feature Monster House and also for Coraline. His published work includes the comic Frank and Frank, and he contributes regularly to the Flight comic anthologies. Having done freelance work for several major motion pictures studios, his past clients include Sony, Dreamworks, BlueSky, Interplay, and Mattel.
For previews to Chris Appelhans, more on Tadahiro Uesugi, and other artists in TREE HOUSE, sign up for our exclusive online preview here.
We hope to see you guys take the opportunity to see the work of some of the best artists in the industryat the OPENING NIGHT of TREE HOUSE, This Saturday @ 7:00 pm!

The opening night of SWEET STREETS at Nucleus on 8/29 is just around the corner &  the co-curator of SWEET STREETS, CARO has created a one of kind CD Sampler: "Sweet Streets Vol.1" featuring music from Japan's own underground scene.  This CD comes FREE with any in-store purchase.


This video was made by Passion Pictures, with backgrounds by Alberto Mielgo. When I saw this, I could immediately tell it had the hand of Robert Valley in it. I have been a huge fan of his illustrations and character designs for some time and feels he is one of those artists that has worked in the industry for years and deserves a bit more recognition.

Ryan Browning's paintings consist of ambient geometric forms in landscapes that make me think of Caspar Friedrich.  Mind you, this is only a mild reference as Browning creates three dimensional shapes that intervene with the environment rather than glorify it.  Its not to say that Browning's work is violent because there exists a playful melody which perpetuates their growth.  I don't know how many of you have ever grown sugar crystals in flasks, but the same effect is translating.  These forms are alive: moving, pulsating and free.
Take a look at more of his work,especially his sculptures at http://www.ryanbrowning.com/