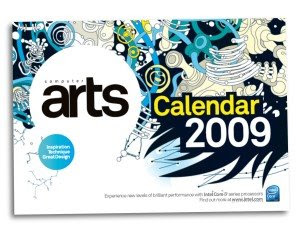 Ronald Kurniawan will be featured in the new issue of Computer Arts Magazine. The new issue will also come with a free 2009 calendar!


I'm excited to announce that we are releasing a new print by James Jean during his signing of the XOXO Hugs and Kisses postcard book set and Fables Covers: The Art of James Jean Vol. 1. The print will be 13" x 16" and only $45. These items will make great holiday gifts, so come get them while they last.

Check out this gift James is offering all of his fans! A hi-resolution poster of the poster for his show at Jonathan Levine Gallery in January.

I was recently introduced to the work of French artist Annette Messager, known mainly for her installation pieces which consist of a wide array of materials, such as colored pencils, photographs, stuffed animals, crayons, metal, books, and embroidery. Morbid, playful, and bizarre, Messager has been a proponent of feminist art for well over 30 years now. Her work is insane! She mashes up both high and low art, the beautiful and the ugly.

Here, she creates internal organs out of brightly colored fabrics and strings them from the ceiling.


All of us at Nucleus hope that you have a memorable Thanksgiving.  It is a time to reflect upon all for which you are thankful.  We are certainly thankful for the opportunity to have a voice in the current contemporary art scene and to work closely with talented artists witnessing their creativity firsthand.  We are very thankful for the continued and growing interest in our exhibitions.  And truly, we are thankful for those who pay frequent visits to our gallery, store, and website and share about us with their family and friends.

We hope that you can visit us this Friday or Saturday in person (or online if you are not in the area).  We are offering savings on unique items that would make memorable gifts for those who matter most.  It is sort of our way to GIVE THANKS to you : )


Line Weight, our exhibition of contemporary drawings featuring a most diverse group of artists opens tomorow night! As artists, a secure foundation in drawing is critical. This exhibit reinforces the importance of drawing while showcasing it's range in creating a final product.

David's labor intensive peices are nothing but a testament to his patience and extreme care in creating a final product. Though still a student at Art Center College of Design, he's already received numerous accolades and already galleries at at his heels! He's definitely one to watch for in the contemporary art scene. Before he really takes off, you can catch him tomorow night and see more of his beautiful pieces in person.


Come join me at the Little Dragon concert tonight @ at The Roxy. I think tickets are still available. Check them out.

Richard is a Canadian artist who is known for creating complex works of art and super fine lines using pen and ink and the silverpoint technique. His images explore the space between imagination and reality and challenges conventional notions of the beautiful and the grotesque. He is interested in the forms found in nature, the morphology of plants and animals, and the effect of time on materials. He has illustrated numerous books for authors such as Clive Barker, China Miéville, Caitlin R. Kiernan, Poppy Z. Brite and others. In 2007, Kirk created six illustrations for Korn's eighth studio album.

See this piece by Richard and more by him and others at this weekend's Line Weight!

In the days leading up to this Saturday's opening for Line Weight, we will be highlighting select artists and exclusive previews of their work in the exhibition. Check back regularly because we have a lot to share!

I wish that everyone could see these in person. They are truly extraordinary. The second one has appeared before at LACMA:

Absorb all of the genius behind Ronald Kurniawan's work and meet the talent in person at the Opening of Line Weight this Saturday!


Urban artist Joshua Callaghan invents a more pleasing view of our surroundings by covering up obnoxious utility boxes with photos, creating the illusion that they are transparent. Hard to describe, easy to see... here's an example:

For more, check out this link.


Here is a collection of recent examples of science inspired art that have been enjoyed. Most of these deal with vibrations and magnetics and is but a small part of several other great works.

Nucleus is proud to be sponsoring an event this weekend helping to fund art materials for local school teachers.  Hey You Guys! is a charity movie screening and art auction featuring the work of several talented artists some of which we have had the privilege working with in the past.  In addition to having the chance of winning fun prizes and procuring some great 80's movie themed artwork, you can also join them for a free screening of the heartwarming classic "The Goonies."

Not in the area?  You can still help fund the charity by bidding for the artwork online here


This might sound gross to many people, but I believe that pumpkin pie ice cream is absolutely phenomenal. Unfortunately, this flavor is mass-produced for only two months of the year. Get some while it lasts, and your taste buds will thank me! 
If you are unfamiliar with Analog Color just yet, you should pay a regular visit to the site time and again to see interviews and other behind-the-scene action in the contemporary art scene.  Analog Color was created in 2007 by artist/filmmaker Jeremy Asher Lynch and writer Nicolas Kurdt.  Their goal was to produce a mini-documentary series based on Contemporary Fine Art.  Utilizing Jeremy's knowledge of art and cinema combined with Nicolas' storytelling, they aim to provide a cinematic experience that is as educational as it is eye catching.  We were honored to have them produce a segment on our recent Endless Reflections: 20 Years of Sandman exhibition.  You can watch the video below which was also just recently spotlighted on Juxtapoz.com

Kudos to Jeremy and Nicolas for these rare glimpses enabling all of us to better connect with the world of art around us.

I've barely started my appreciation for paper. It's something so ubiquitous that, after a while, your brain starts to ignore it. You abuse it, using it to clean the mess off your shoes, or use it as a barrier between chewed gum and your fingers. Something with a history as old as civilization should amount to so much more.

Reflecting on the metamorphosis, transforming the overlooked into something meaningful is a constant influence for many artists. Kako Ueda's pieces show tons of skill and determination, but also a love and respect for the material. Large, intricate paper cuttings explore the relationship between nature and culture with the passage of time.

Kako just finished up a solo show in NY, and will be part of the "Drawn in the Clouds" group show (including Yoko Ono, Do Ho Suh and Li Wei) at the Kiasma Contemporary Art Museum in Helsinki that will be up from Nov 1st to Feb 2009.

Check out Kako's other impressive works!