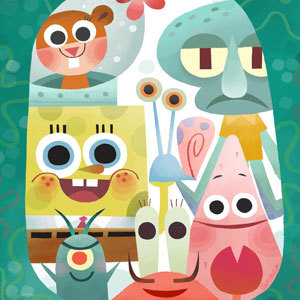 view photos
SpongeBob SquarePants is a world-renowned and beloved character-driven animated series that chronicles the nautical and sometimes nonsensical adventures of SpongeBob, an incurably optimistic and earnest sea sponge, and his undersea friends. Since debuting on Nickelodeon in 1999, the animated series quickly gained immense popularity and has remained a household name for over a decade, captivating children and adults alike with its colorful and eclectic cast of characters. Created and executive produced by marine biologist and animator, Stephen Hillenburg, SpongeBob SquarePants is one of Nickelodeon's longest-running series, with nearly 200 episodes airing on the network. Jumpin' jellyfish, that's a lot!

Nucleus and Nickelodeon have partnered up to present a tribute to our absorbent, yellow and porous friend, SpongeBob. The collection will feature work from a wide spectrum of artists, including a few of the show's very own. Neptune himself would be excited to see this! Stay tuned for more details about opening night festivities, special releases, plus a very rare behind-the-scenes glimpse at the art technique and style of the series.

Production Art On Display!
Over two dozen works on loan from Nickelodeon including original animation cels, character designs, and acrylic paintings from season one.  Plus, we are excited to feature six 3D figures used in the stop motion special, "It's a SpongeBob Christmas."

The Art & Making of SpongeBob SquarePants
Join Us Saturday, August 3, 2:00 to 5:00PM
We welcome artists from the animated series for an extremely rare glimpse at behind-the-scenes artwork and learn about the process of production design and visual development from a few of the series' very own including Creative Director Vincent Waller.  Learn more

Join Us for Opening Night!
Hawaiian Shirt Encouraged
Open to the Public, All Ages Welcome, No RSVP

• Live SpongeBob and Squidward Costumed Characters
• Win Prizes in our Jumpin' Jellyfish Booth
• SpongeBob Scavenger Hunt
• Free Raffle Contest (10:00PM) - You do not need to be present to win. Winning numbers will be posted on our Facebook
• Walk the Yellow Carpet Photo Op
• Meet Exhibiting Artists
• Door Prizes Include a Hawaiian Lei for the First 50 attendees
• Complimentary Refreshments & More!

DON'T MISS artists from SpongeBob Comics greeting fans and signing copies of the series available for sale during opening night!

Above image by Joey Chou