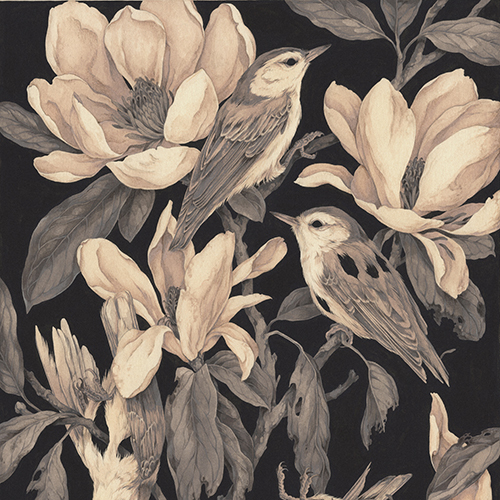 
AZURE (Nico Delort): Nico will have new original scratchboard illustrations that evoke the feeling of blue skies and breeziness.

NICO DELORT
is a French-Canadian illustrator working in Paris, France. His original scratchboard work has won him several accolades and he has created work for Blizzard, Lucasfilm, Penguin Books and many more high profile clients. This will be Nico's second solo exhibition with us. More details and surprises to be announced.


TEAGAN WHITE
is an artist and illustrator depicting flora and fauna at the threshold of life and death. Their delicate gouache and watercolor paintings and intricate line drawings use poetic allegory to lament the tragic relationship between humans and the rest of the Earth, and to explore the tender reciprocity and carnal discord that coexist seamlessly in all of Nature.
Teagan’s work is influenced by years of living in the bleak Midwest and Great Lakes region, burying roadkill, traveling by bike, and working with wildlife. They recently relocated to the Pacific Northwest, where savage coasts lined with dead seabirds and foggy slug-filled old growth forests are creeping into their paintings.