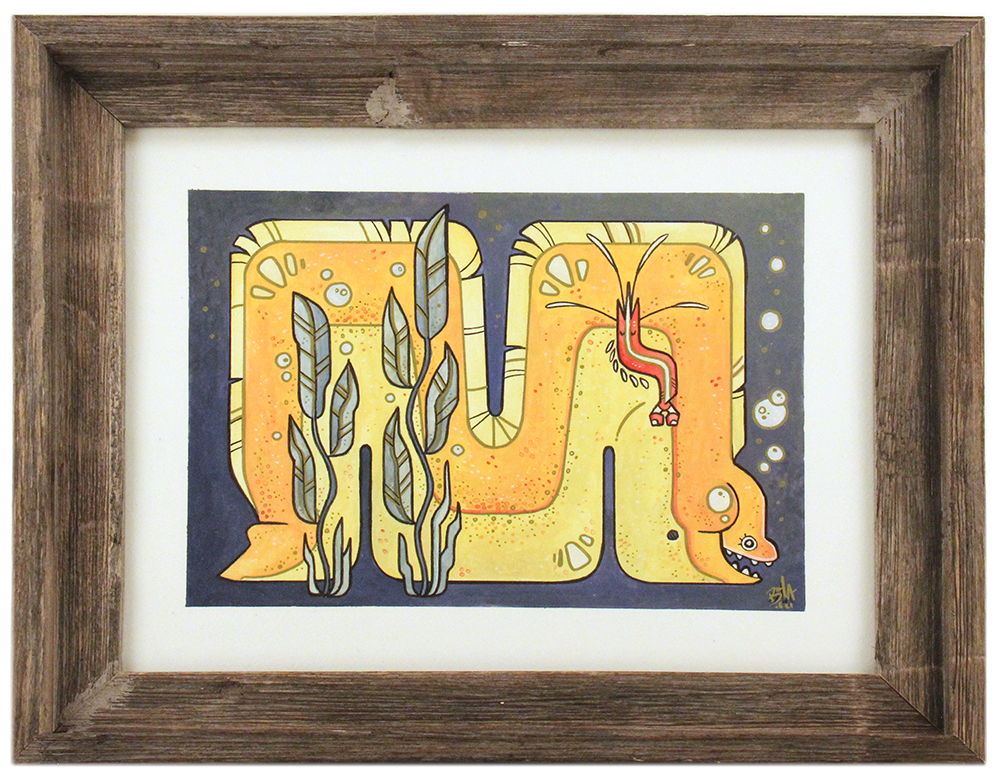 < previous
SHOW ALL
next >
M is for Morray


There are approximately 200 different species of moray eel found worldwide. Most live in marine habitats, but some are even found in brackish or freshwater.

The green moray eel can attribute its color to a mixture of a full layer of yellow mucus covering its long, slender body and the eel’s natural brownish grey skin color. This mucus protects the eel from parasites and bacteria. It has one long dorsal fin that extends down the entire length of its body and connects to a second fin, the caudal fin. Their faces have two nostrils, made visible by two small openings. On their upper jaw, moray eels have two full rows of teeth, while on the bottom there is just a single row of teeth. The average length of green moray eels, from nose to tail, measures roughly 5.91 feet.

Moray eels hunt for fish in small crevices along coral reefs and shorelines. If the fish appears too large to consume whole, the eel can wrap itself around the fish in a knot to disable it and then consumes it after tearing it into smaller pieces. Moray eels are not picky eaters. They are opportunistic predators that prey on any fish that is small enough for them to consume, as well as other crustaceans and cephalopods. The moray eel serves its role as a top predator in its marine ecosystem, positioning itself to have few predators due to its large size and reputation to viciously attack potential threats.

Pictured as well in the piece is a cleaner shrimp, which has a symbiotic relationship with the moray eel. Moray eels are known to seek out areas rife with cleaner shrimp and allow them to "clean" them, which frees the eel of parasites and grants the cleaner shrimp an easy meal.

Green moray eels can often be seen by scuba divers along coral reefs. Although feared by humans for their vicious bite, moray eels rarely attack unless first provoked. While green moray eels are not currently threatened, their coral reef habitat is under pressure—primarily from global warming. Since the 80’s our oceans have absorbed 90% of the excess heat in the atmosphere and up to 30% of carbon emissions from the fossil fuel industry. This mixture of heat and carbon emissions leads to a domino effect of negative consequences starting with increased acidity in our oceans and leading to mass bleaching of coral reefs. If the planet heats up by 2°C, nearly all of the world’s coral reefs, including places where moray eels live, will die. Oceana is attacking climate change by protecting carbon-sequestering habitats, supporting sustainable fisheries, and campaigning against expanded offshore drilling.


Thankfully these creatures are not in danger of extinction currently, but they are subject to the rapid changes that their costal habitats undergo due to human influence. Your purchase of this piece contributes 20% to Oceana to better protect and conserve the vital coral reefs that shelter so many aquatic creatures. Learn more on how to protect the environments that shelter the moray eel as well as countless other examples of marine life at Oceana.org.