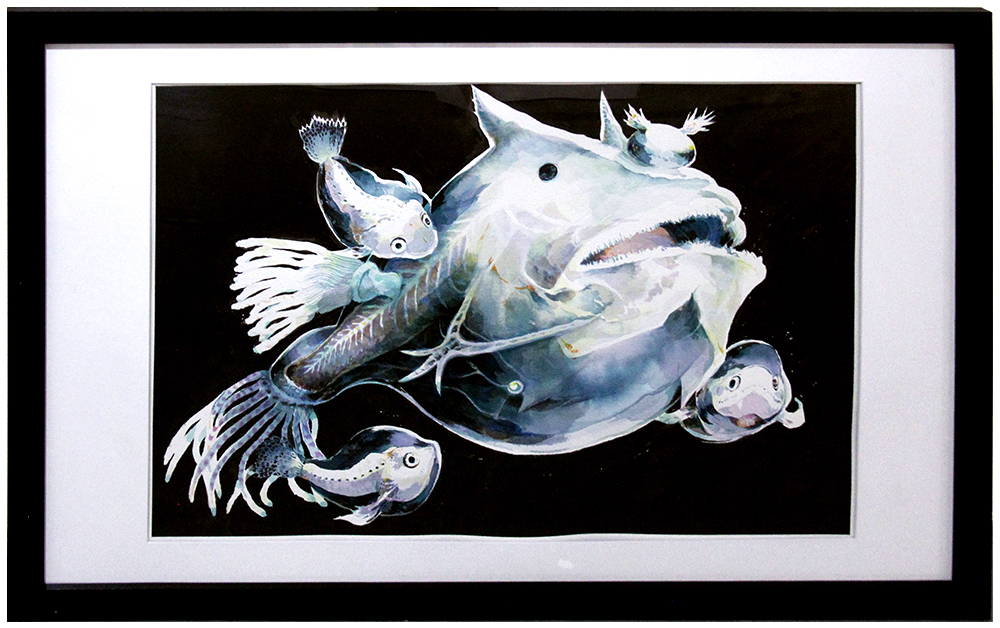 < previous
SHOW ALL
next >
Ghostly Seadevil

Adult female Haplophryne mollis (ghostly devilfish)are much larger than adult males, with a maximum length of 16 cm (6.3 in), but 8 cm (3 in) is a more common length. As in other angler fish, the front dorsal fin is replaced by a lure (illicium or esca) that protrudes forward and over the mouth to attract prey, but in this species this just consists of a flap of skin and there is no "fishing rod".

Unlike most other deepsea anglerfish, H. mollis lacks pigmentation, and both sexes appear pallid and translucent, with the musculature and portions of the skeleton clearly showing through the skin. Because of the great depths at which this fish lives, it is seldom encountered by humans. In 2009 it was reported that 88 known female specimens had been observed. It is found in the bathypelagic and mesopelagic zones of tropical and subtropical parts of the world's oceans at depths down to about 2,250 m (7,400 ft).

Male H. mollis are at first free-living, but when they have found a female they latch onto her with their teeth. The males orient themselves in random directions, and there may be more than one male per female.  As time passes, the male becomes fused to the female and their tissues combine. The male can be considered as a parasite of the female but only about 30% of mature females encountered have an attached male, so many females may never encounter a mate, and remain in a solitary, non-reproductive state for the duration of their lives.

Deep sea anglerfish are not eaten by people, and there is no evidence to suggest that people have any negative affects on their populations. They are likely naturally rare, however, and any changes to the deep-sea environment could threaten this interesting species. Your purchase of this piece contributes 20% to Oceana's ongoing efforts to explore and understand the marine life found in the deepest parts of our ocean as well as how to best preserve them. Learn more at Oceana.org.