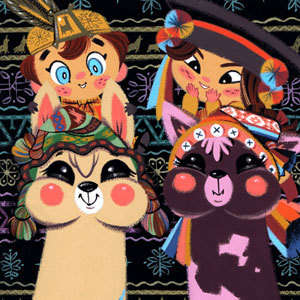 view photos
This is a story about a boy and his dog.  They've embarked on a spontaneous journey to new places spanning the globe. Uncertain of what their adventures may bring, they would like for you to join them in the fun.


Lorelay Bové  is an artist currently residing in Los Angeles, California. Bové received her BFA – Character Animation from the California Institute of the Arts in 2007 and went on to become an intern at Pixar Animation Studios. The artist now holds the position of Visual Development Artist at Disney Animation Studios and has worked on several blockbuster Disney animations such as Tangled, Winnie the Pooh, The Princess and the Frog and animated shorts such as Prep and Landing and The Ballad of Nessie. Bové is heavily inspired by the culture of the 50's and 60's as well as Old Hollywood Films.  Bové strives to constantly create an organized variety of shapes and color in her work to maintain interest.


Becky Dreistadt has recently relocated to Los Angeles, California from New Zealand. Dreistadt is a comic artist, illustrator, graduate of the Savannah College of Art and Design in Sequential Art and co-founder of Tiny Kitten Teeth, a hand-painted and weekly updated webcomic about a misfit’s adventures in Owltown. Dreistadt collaborates regularly with her partner, Frank Gibson. Together, they have self-published three comic books, appeared in several print anthologies, comic conventions and gallery shows. In 2010, Dreistadt self-produced "Tigerbuttah", a twenty-four page tale for all ages that follows Tigerbuttah's journey to rediscover his imagination. "Tigerbuttah is printed like a vintage Golden Book and was hand-painted by Dreistadt in only two week's time. The artist draws her inspiration from a variety of interesting line work; older architecture, animals, cartoons and folk art.
FUN FACT: Bové and Dreistadt have created one collaborative piece for the exhibit.

Nucleus offers a giclée print of Lorelay Bové's Alice In The Rain inspired by Alice in Wonderland.  Available here